Beth Fender was a Londoner – evacuated during the war – returning to the capital to train as a nurse at St Bartholomews Hospital. Marriage and family life took her to York for many years; she then returned south to Shortlands, near Bromley, after being widowed. In her early 60’s she joined the Shortlands Poetry Circle and discovered what was to be a love affair with poetry which lasted the rest of her life.

Beth came to Belper in 1992 to support her daughter, Hilary, with her family. On discovering there was no poetry in the town, she set up an afternoon group, Belper Poetry Circle, to read and appreciate poetry; the evening group – Poetry People – was set up later to provide opportunity to write poetry as well as study it. Beth also helped in the setting up of a poetry group in Ripley. These groups are all still thriving. As well as sharing her enthusiasm for poetry, Beth exuded a zest for living that astounded people half her age. Involved in St Peters church, the Historical Society, as a volunteer at Strutt’s North Mill and visitor centre, the WEA, and much, much more, Beth came to love her adopted home and its people.

Taking up the mantle

One of Beth’s granddaughters, Hannah Headden, has taken up the mantle and is composing her own poetry. Click here to see a selection of her poetry.

Beth herself had introduced the idea of a poetry trail or walk to the poetry groups, having visited two in North America – for Robert Frost, and for William Stafford in North Washington. According to the Poetry Society there are only a very small number of such trails in the UK. Inspiration was taken from a millennium project ‘Sites of Meaning’ in Derbyshire, where parish boundaries are marked by stone carvings and sculptures. It was felt that this would be an exciting and unique project for the town, and a fitting tribute to a remarkable woman who was passionate about poetry.

This has been guided by the wish to include some of Beth’s own poetry, and some of her favourite poems/poets. Some very well-known poetry is included but also some that has not been aired publicly before, by local or less well-known writers. In some cases an extract is sufficient. Choice of a few poems has been led by the siting in a couple of instances. Both ‘ancient’ and modern poets are being represented, also male and female! We feel that there really will be something for everyone – including children.

The choice of sites was guided by Beth’s favourite locations, places that were significant to her (such as the library); also some of the scenic (tourist) parts of the town – like the River Gardens; and some more hidden spots for an element of surprise, so that folk will just ‘happen’ upon a poem.

To get more details on the trail, click on ‘The Trail’ at the top of this page. 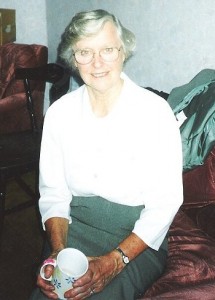 “Si monumentum requiris, circumspice”
(“If you seek [her] monument, look around” – epitaph to Christopher Wren at St Paul’s Cathedral)